Project Rise volunteers from Chicago partnered with Habitat for Humanity in Hanover Park, Illinois, to landscape a pre-constructed 3-bedroom house, while seeding the lawn, laying a bed of mulch, and planting flowers and bushes.

Habitat for Humanity provides decent, affordable homes for low-income families throughout the world.  They also  invite volunteers to invest in their local communities by donating their labor to help build Habitat project housing.  Last month, 18 members of the Chicago community Dawoodi Bohras joined with Habitat volunteers and members of the Habitat community to lend a helping hand to a Habitat affordable housing project.

Habitat for Humanity places a great deal of importance on “sweat equity,” whereby a new homeowner invests work in their home or on a home for another family.  It is an opportunity for families to help build their home alongside volunteers and play an active part in making their dream of owning a home a reality. 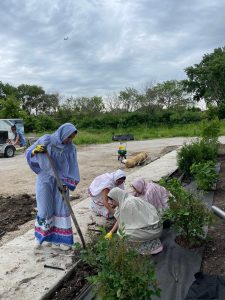 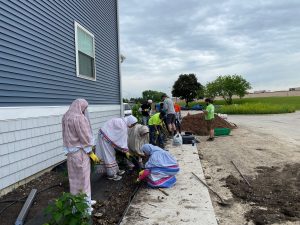 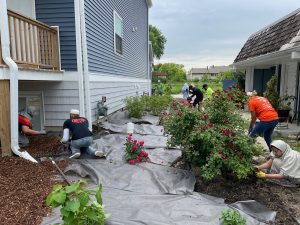 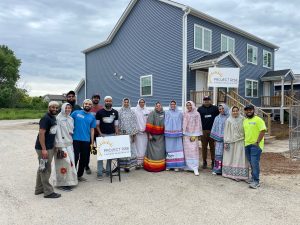 “What was very impactful for me was seeing the person who was going to live in one of these houses,” said Muffadal Burhani, 25, one of the Project Rise volunteers.  “Since we were able to meet one of the residents it made it more fulfilling for me as we put in the finishing touches for the house.” Burhani added, “It was nice that there was a good mix of different age groups among our jamaat volunteers which allowed many different members of the community to come together and work towards a common goal.”

Debbie White, Director of Development at DuPage Habitat for Humanity, said, “Thank you so very much to the volunteers from [the Dawoodi Bohra community of Chicago].  We truly appreciate your support.  The landscaping looks fantastic!”

The event also served as an opportunity for many members of the community to come together and work towards helping individuals who are looking for secure housing. Working alongside such Habitat homeowners made the experience especially rewarding for the Dawoodi Bohras.