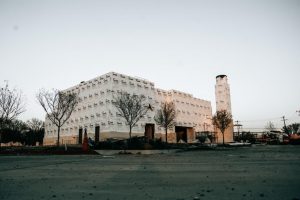 On April 3rd, 2021, Mayor George Fuller of Mckinney, his wife, Maylee Thomson-Fuller, and other honorable guests and neighbors graced the Masjid Site of the Dawoodi Bohra Community of Collin County with their presence.  It was a beautiful day, with gorgeous weather, a nice breeze, and feeling of warmth and togetherness within the community.  Approximately 100 people gathered to welcome the Mayor and his wife, tour the masjid, and eat tasty barbeque while maintaining social distancing and safety protocols.

The Dawoodi Bohra Community of Collin County was established five years ago, and chose the City of McKinney as its home to construct their masjid. This complex would be the Dawoodi Bohras’ place for sermons, prayers, and informal gatherings to bring members of the community together, both young and old.  The construction project is progressing towards completion, with the outer façade in progress, and the interior minute details a current focus. 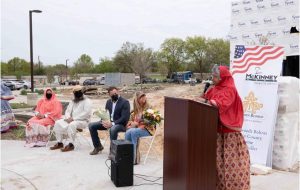 The program was initiated with a warm welcome from Sakina Ismaelbay, a member of the Dawoodi Bohra community.  She went on to introduce the President and Aamil Saheb of the Dawoodi Bohra Community of Collin County, Shk. Aliasger Rasheed. He thanked Mayor Fuller, Maylee, Dawoodi Bohra members, respected guests and neighbors for coming to visit the Masjid Site.

“When the Dawoodi Bohra Community was established,” he said, “We had a decision to make. We chose the city of McKinney for the place that we would construct our masjid, and have moved forward with the project ever since. Clearly, McKinney, with its excellent schools, safe neighborhoods, many initiatives for businesses, and commitment to diversity, was the ideal place.”

Mayor George Fuller was then introduced and came to the podium to say a few words.  Mayor Fuller expressed that he and Maylee were very honored to be at the Masjid Site.   He noted that, as a builder himself, he was able to deeply appreciate seeing a building go up and “create something [you] can raise a family in and come together in.”

Mayor Fuller’s speech was met with strong applause from the congregation.  Sakina Ismaelbay then announced that as part of Project Rise, the Dawoodi Bohras’ philanthropic initiative, the Collin County members have come together to donate towards the Love Life Foundation of Mckinney. This foundation was established by Mayor Fuller and Maylee Thomson-Fuller 28 years ago, with the mission, “To spread love and hope to the at-risk in our community by partnering with local agencies to provide valuable aid and support.”  A large life-size check in the amount of $1153 was presented to Mayor Fuller and Maylee by Shk. Aliasger Rasheed, and his wife, Rashida.

Mayor Fuller and Maylee received this donation with happiness and gratitude. Maylee then took the podium with tears in her eyes, expressing her honor that the Dawoodi Bohras of Collin County were “Investing in something that they have been a part of for so many years.”  She thanked the Dawoodi Bohras profusely and promised that they “will be good stewards to invest [the money] in those who really need it,” emphasizing children, single mothers, and the underprivileged.

Both Mayor Fuller and Maylee were presented with beautiful flower bouquets from Secretary of the Dawoodi Bohra Community of Collin County, Shk. Mohammed Khurrum, and his wife, Sakina.

To wrap up the presentations, Farida Shipchandler recited a poem that summed up the Dawoodi Bohras’ aspiration for the role their future masjid will play in the community.

“… We are turning a promise into reality

Constructing an anchor for our community

On faith we are building a sacred foundation

Our enduring commitment for future generations.” 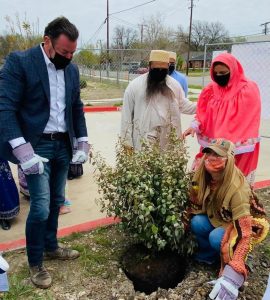 Following the speeches, a tree planting ceremony was held to commemorate Earth Day, and Mayor Fuller and Maylee graciously planted two trees on the Masjid Site. Aamil Saheb Shk. Aliasger Rasheed reaffirmed the Dawoodi Bohras’ belief in environmental conservation, stating that their “…goal is to make our masjid environment beautiful and environmentally sound, first and foremost by making tree planting a priority.”

After the ceremony, Mayor Fuller, Maylee and honored guests were invited for an interior tour of the Masjid Site. Members of the community described the floor plans of the masjid, and gave an overview of the intricate design elements incorporating architectural attributes from the Middle East and India.

All invitees then enjoyed a delicious barbeque lunch of burgers and hot dogs. Invitees were also given a gift bag of white chocolate macadamia cookies as a token of appreciation for taking the time to visit the Masjid Site.

The Mayor left the Masjid Site with a delegation of members of the community bidding him farewell.  The Dawoodi Bohra community of Collin County was very honored to have Mayor Fuller and Maylee visit the Masjid Site, and to participate in the Love Life Foundation. We look forward to completing the Masjid Project as soon as possible and become part of the inclusive, diverse, and prosperous city of Mckinney.