Adnan Dohadwala of the Collin County community of Dawoodi Bohras recently achieved his 2nd-degree black belt in Tae Kwon Do at just eleven years of age.  It took him six years of hard work and perseverance to get there, and he says he will continue onward in pursuit of his 3rd-degree belt and maybe beyond.

Adnan started his Tae Kwon Do journey when he was in kindergarten, sparring with his best friend..  He recalled believing at first that Tae Kwon Do was all about “fighting, cool kicks, big jumps, and breaking lots of wooden boards.”  But when he started, he learned it was much more than that.” 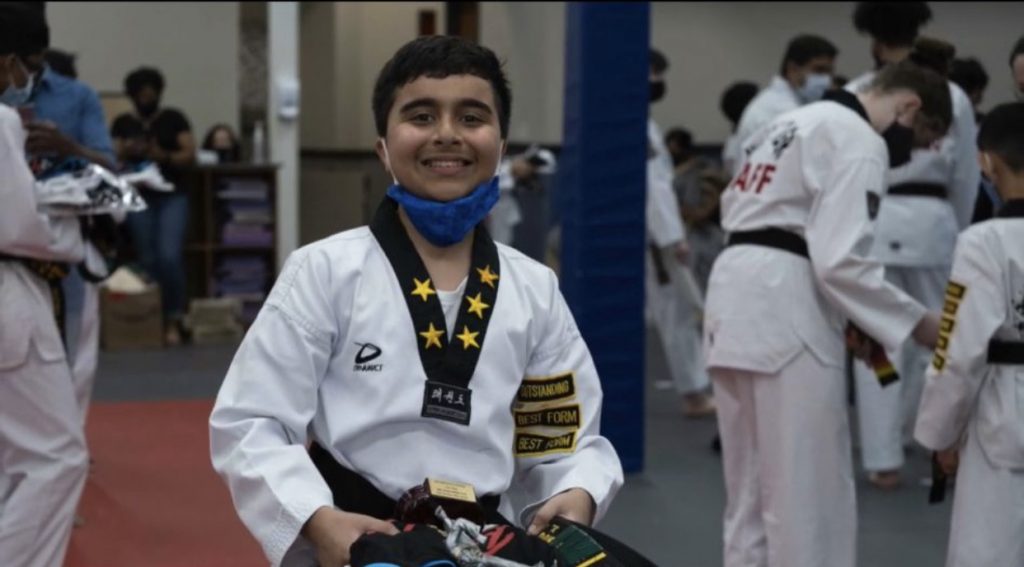 He learned Korean terminology and counting, and was taught to be respectful in his every word and action.  He explained that each of his forms, or series of Tae Kwon Do movements, were to be precise with focus and concentration.  Camaraderie and teamwork were prioritized.  Every few months, he took and passed an exam on his forms and board breaking appropriate for his level.  When he passed his first white belt test, he said his goal of reaching a black belt felt far away.  With patience and perseverance, he continued and gained his black belt at nine years old. He took a break for a few months, but quickly missed the discipline, feeling of achievement, and friendships so he went onward towards his 2nd degree black belt.

A large portion of the 2nd degree training during COVID times was through virtual learning.  He recalls that “it was challenging to learn the forms without seeing the instructors in-person for feedback. I had to practice sparring with my parents who I had to first teach because they did not know what to do.  Also, I practiced board breaking by using pillows around the house. I was creative for sure and did a lot of independent training.  I felt confident in my skills to finally attain a 2nd-degree black belt in May 2021.”

While practicing Tae Kwon Do, Adnan has been busy with other extracurricular activities.  He memorized the 30th chapter of the Holy Quran to heart at just eight years of age, and continues to pursue his goal of  memorizing the entire Holy Quran.  He has won math, spelling bee, and science fair competitions.  He has volunteered with a charity program called Numana where, along with some of his classmates, he has helped to make 20,000 food packages. He is in the Gifted and Talented (GT) program in his school and has received leadership awards from his teachers two years in a row.  He loves sports and has reached the playoffs with his baseball and basketball teams several years in a row.  He also enjoys playing the bassoon (an instrument in the school band), swimming, tennis, and playing video games.  With all his different interests, it is no surprise that he said, “time management is something that I have learned early on.”

Like all Dawoodi Bohras, Adnan takes health and fitness very seriously, but his passion for Tae Kwon Do has given him so much more.  “Tae Kwon Do has given me skills that I have used and will continue to use in many aspects of my life.  As I continue onto my 3rd degree black belt, I hope that with patience, perseverance, and hard work I will attain all my goals!”  Adnan Dohadwala is an exceptional young man with great accomplishments, drive and contributions to society, and we wish him well.