By planting trees in the neighborhood, members of Lifepath Church hope something even deeper takes root.

Trees not only beautify the neighborhood, says Pastor Rich Reaves, they increase green space, providing a valuable way to care for the environment.

It all boils down to spreading love, Reaves said. And in addition to showing love for God’s creation, he wants to demonstrate the importance of loving one’s neighbor.

That’s why Lifepath’s recent tree giveaway was hosted in collaboration with Masjid E Mohammadi, located directly next to the church.

Together, the two congregations distributed nearly 2,000 trees on Jan. 15. On social media, Reaves posted, “Would you, one of your neighbors, a local church, or a small business you know, like to have some free trees?”

All hopeful recipients had to do was text “Free Trees” to a phone number at the church and then simply drive up.

About 80 volunteers from both the church and mosque worked side-by-side during the giveaway. At noon, they shared lunch, provided by the mosque.

“The event was not just about planting trees but also about displaying a picture of unity and friendship,” Reaves said.

Working together for a greater impact

The pastor is in his ninth year at the helm of Lifepath. Not long after he arrived, he took note of the neighboring Masjid E Mohammadi.

“It’s one of the largest mosques in the city,” Reaves said. “It’s definitely a landmark, and it’s just stunning.”

One day, Reaves was driving and saw a sign outside the masjid listing a phone number for deliveries.
“I called the number,” Reaves said. “I explained that I wanted to be a neighbor.

And that was the beginning of our relationship.”

Since then, a strong bond has developed. Church and masjid members volunteer to wrap Christmas gifts together at Barnes & Noble.

Ummehani Ismail, a spokeswoman and member of the mosque, said youth from both congregations join for a biannual litter cleanup in the neighborhood. “It’s a fun bonding experience,” she said.

The church and masjid also recently joined to pack meals for the nonprofit Rise Against Hunger. “We love working with the church,” Ismail said.

Together, the congregations demonstrate the importance of taking action and working with others to make a larger impact.

“You can’t just passively exist,” Ismail said. “You have to do something. It can be something small, one little thing, but it does make a difference.”

The tree giveaway is a perfect example, she added.

She explained that the Masjid E Mohammadi, which serves the Dawoodi Bohras, is a Muslim denomination.

Internationally, the Dawoodi Bohras are banding together for an initiative called Project Rise, which is dedicated to improving nutrition, water access, health care, education and environmental conservation.

“This is a global movement,” Ismail said. “It strives to improve the lives in communities where Dawoodi Bohras live.”

Houston has the largest population of the faith in the U.S., she added.

Masjid E Mohammadi is especially committed to caring for the environment. In fact, the goal is to have net zero emissions by 2030. The mosque is already composting food waste from its community kitchen. 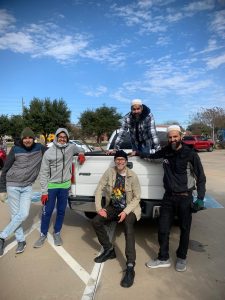 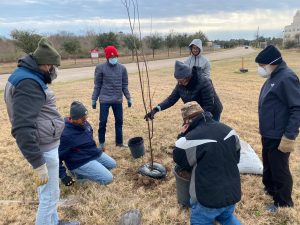 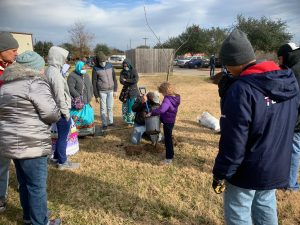 Reaves knew that the masjid would be an ideal partner in his tree giveaway, since the congregations share a common interest.

Climate change and global warming are topics that have been on his mind lately, and he’s preached sermons on the subject.

Reaves referred to Luke 19:40, “Jesus says, even if you make my followers quiet, these rocks will cry out,” the pastor said. “In several Psalms, creation has a voice. Creation speaks and is alive. And we have been assaulting it. We are here to use it and appreciate it, but not to abuse it.”

A landscaper at the church told Reaves about Trees for Houston, a nonprofit that promotes planting trees around the city.

The pastor connected with executive director Barry Ward and developed a vision for a tree giveaway.

“Barry said, ‘I’ll give you trees. How many do you want?’ And It grew from there,” Reaves said.

After ironing out some details and purchasing mulch, Lifepath and Masjid E Mohammadi were ready for the tree giveaway.

“This is our chance to communicate to the community that we care about this,” Reaves told church members.

Crews even made deliveries and helped plant them.

Many individuals who picked up trees told the pastor that they had lost their landscaping during the February freeze last year. “We heard that many times,” Reaves said.

Helping neighbors plant trees is a small step in the right direction, Reaves said. “We hope the example will last longer — and hopefully inspire others.”

Working with the mosque is also an example to others, the pastor explained.

“We don’t have to fight injustice alone,” he said. “There’s strength in numbers. And we trust others will step up, too.”

Ismail agreed. “Working together helps us bond and teaches youth in the community that there really is no difference,” she said. “At the end of the day, we’re all the same. We all care about our children. And we just want a better tomorrow.”

Lindsay Peyton is a freelance writer based in Houston.