The Dawoodi Bohras of New York hosted their first Eid-ul-Fitr event at their soon-to-be-completed masjid site in Springfield Boulevard, Queens.  Eid-ul-Fitr is a celebration that marks the end of the fasting month of Ramadan. 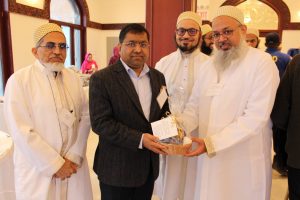 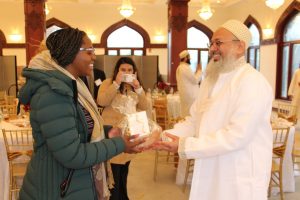 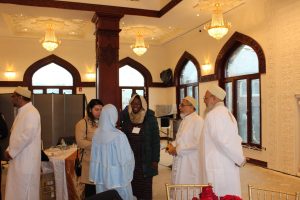 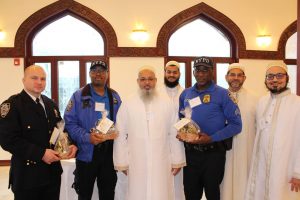 The event opened with a Quran recitation and a speech about the history of Dawoodi Bohras in New York, many of whom immigrated in the 1970s from the Indian subcontinent and East Africa.

Huzaifa Nomani, the Amil (or President) of the New York Dawoodi Bohras, welcomed guests to the event, and commented on the new masjid.  “Today marks an ending of a very long journey and a beginning of a new one.  This journey started when this space was bought and built into a prayer hall in early 2001.  The bigger dream was always to build a masjid—a permanent and beautiful house of worship.”

Construction of the new masjid began in 2018 and the project has been funded entirely by the New York Dawoodi Bohra community.  There were many challenges along the way, including delays in construction and shipment of materials due to the COVID-19 pandemic and supply chain problems.  Now nearing completion, the new mosque is awaiting official inauguration. 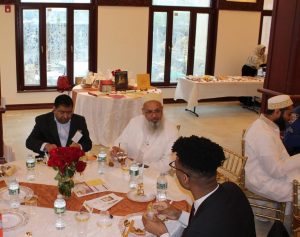 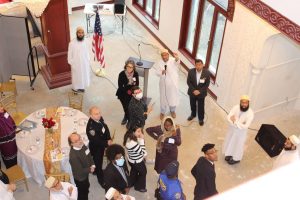 Guests were taken for a tour of the new masjid, the design of which is inspired by architecture from masjids in Cairo, built more than 1,000 years ago during the Fatimid era.  The qibla, or prayer niche from where congregational prayer is led, is built from marble imported from the mines of Makrana—a city in India renowned for its pristine white marble, the very same marble used in the Taj Mahal.  The qibla arch has hand-carved designs and Arabic inscriptions from the Holy Quran crafted by Indian artisans.

Taha Adib, representative of the New York Dawoodi Bohras, said, “The new masjid will be home for worshippers of our New York community for generations to come.  We are fortunate to be living in a country that supports our religious rights and freedoms and supports building places of worship such as this one.  And we are thankful for our neighbors and supporters, many of whom are present here today.”

New York City Council member for District 27, Nantasha Williams, said, “I feel incredibly honored to have a Dawoodi Bohra mosque being built in my district and look forward to working closely with you!”

For the Dawoodi Bohras, a masjid is not just a place of prayer but is also a center of education and learning, and a forum for interfaith dialogue and outreach.  It is a place for spiritual reflection and a common ground where the New York community can gather and connect with their faith and culture and share them with their neighbors and fellow New Yorkers.