A host of local dignitaries joined the Dawoodi Bohras of Seattle for their Iftaar dinner in celebration of Ramadan, including a state senator, government officials, city officials, law enforcement officers, and architects for the Bohras’ proposed masjid project.

Guests gathered at the Dawoodi Bohras’ place of worship in Kirkland, Washington, and were warmly welcomed by representatives of the community.

A recitation from the Holy Quran was given by 8-year-old Abbas Dohadwala and the national anthem was sung by local children.  Master of ceremonies Rukaiya Dohadwala introduced the guests, who were presented with flower bouquets by the children.

A video was played to introduce the guests to the Dawoodi Bohra faith, culture, traditions, food, attire, patriotism, and leader, His Holiness Syedna Mufaddal Saifuddin, as well as highlighting the Bohras’ belief in women’s empowerment, equal access to education.  The video also contained details of Project Rise, the Dawoodi Bohras’ global initiative to raise living standards among the most vulnerable members of society while protecting and enhancing the natural environment, as well as the various career paths that Bohras take wherever they live, particularly in business, medicine, law and IT.

Aliasgar Jamali, the head of the Dawoodi Bohra community of Seattle, read a message from His Holiness Syedna Mufaddal Saifuddin sent especially for the event.  In addition to sending his prayers and good wishes for the gathering, His Holiness emphasized the need for all to come together in unity to overcome the various political, socio-economic and environmental challenges that confront humanity today.

State Senator Manka Dhingra addressed the gathering, saying, “We are global citizens.  We need to accept how interconnected we all are, regardless of where we were born, where we live, what socio-economic status we come from.”  Ms. Dhingra added, “And seeing people from all over the world, being selfless and uplifting each other truly shows us that at a basic level there is so much more that we share than what separates us all.”

Deputy Mayor of the City of Kirkland, Mr. Arnold said, “We (the City of Kirkland) are grateful to have the Dawoodi Bohras call Kirkland its home.  We salute your dedication to service and all that you do for our community.”  Mr. Arnold added, “We have made it a priority and especially in the last several years to reach out to communities of faith and establish and strengthen our relationships.”

An overview of the proposed Masjid project in the city of Duvall was given by Shabbir Sharaf.  Toward the end of the evening, members of the community prepared for prayers and the breaking of the fast.  The call to prayer, the azaan, was given in the most melodious voice, which delighted all the guests, and all stayed to join community members for Iftaar.  The guests were served tea, dates and cookies during Iftaar. 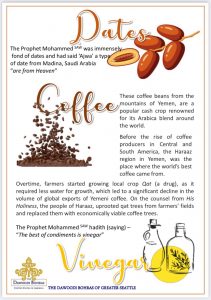 Afterwards, all gathered for a formal Iftaar dinner.  As is tradition, members of the Bohra community washed the hands of the visitors, after which “thaals” or circular steel trays laden with traditional Bohra cuisine were brought to the tables.  Community members explained the significant tradition of starting a meal with a pinch of salt, and the various other Bohra dining etiquette and culinary traditions, while individually serving everyone.

Guests were presented with a thoughtful parting gift or silat (which means “connection), consisting of Yemen coffee, dates and flavored vinegar, and a card explaining the significance of the items to the Dawoodi Bohras and their Islamic faith.

The event ended with everyone’s hearts filled with respect, and all knew they had created new friendships to be connected again. 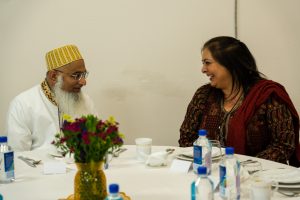 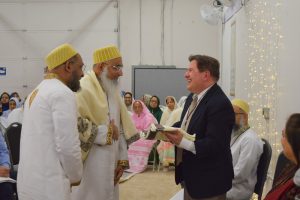 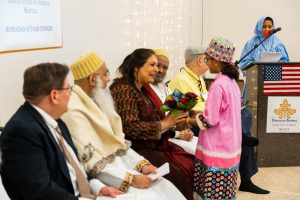 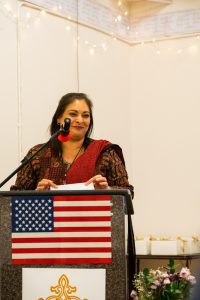 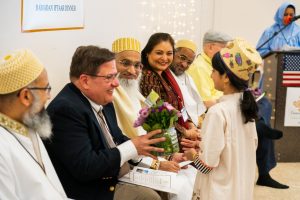 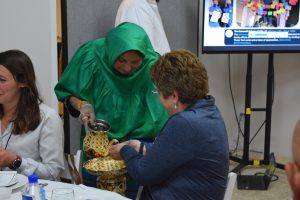 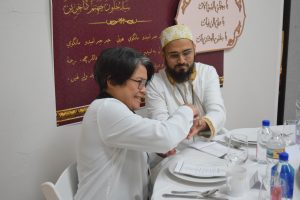 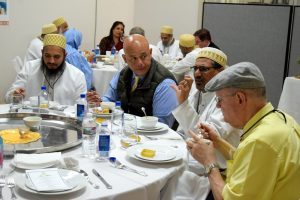 City Council Member of Kirkland, Mr. Toby Nixon, said, “I love learning more about all faith traditions.  I very much appreciate your invitation and the opportunity to learn.”

Lieutenant L. Zaplan said, “Thank you so much for allowing me to participate in the Iftaar dinner.  Once again, the food was delicious and your company was wonderful.”

Other guests included members of the Kirkland Emergency Office and the Masjid Architects from Jackson Main Architecture, Seattle.