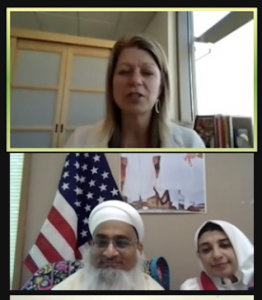 The program began with the recitation of a chapter of the Holy Quran, followed by a spirited rendering of the national anthem by a group of community children. The emcee Rukaiya Dahodwala introduced the speakers and recognized the dignitaries in attendance, the Mayor of the City of Redmond and the President of the Dawoodi Bohras of Seattle, Shk Aliasgar Jamali.

The event featured educational talks from members of the community on varied aspects of the Dawoodi Bohra culture, tradition and lifestyle. A short video showcasing the community’s’ 2020 outreach activities provided the mayor with a better understanding of the community’s integration with the local neighborhood. The President of the community spoke eloquently about the significance of Ramadan and Eid, and also observed Memorial Day by saying “it is the Month of Memorial Day during which we’re reminded of the ultimate sacrifice made by our men and women in uniform for others – for us.”

Shabbir Sharaf, a member of the Seattle’s Dawoodi Bohra community’s Board of Directors spoke about the Dawoodi Bohras worldwide architectural heritage built by His Holiness Dr. Syedna Mufaddal Saifuddin TUS. He also presented the plans of the forthcoming masjid in Redmond, which has been designated as a landmark and a work of art using sustainable materials and green architecture practices. The project will break ground in the very near future and is anticipating completion in the next 2 to 3 years.

Mayor Birney addressed the gathering and spoke about how the city thrived amidst the 16-month challenging period of COVID-19 – making sure the quality of work and level of commitment to the city didn’t change. She also spoke about the ambitious Redmond 2050 project. She ensured that “Redmond is a city where all are welcome and all thrive”. But above all, she mentioned “Thank you for choosing Redmond to put a permanent home here and building your new mosque, it is important to me that communities with different cultures, decide to place Redmond as their home – and everyone feels welcome here.”

The community whole-heartedly extended an invite to the mayor for next year’s Eid al-Fitr as well, and hoped that this could be an annual community tradition.