Mayor Jane Castor presented the key to the city of Tampa to the leader of the Dawoodi Bohras, His Holiness Syedna Mufaddal Saifuddin, in honor of the Bohra community’s extensive contributions to the city of Tampa and surrounding areas in Florida. His Holiness’ teachings and guidance lie at the foundation of the community’s ethos, the hallmarks of which are kindness, generosity, patriotism and love for all Creation.

Commenting on the award, Mayor Castor said, “The Dawoodi Bohras of Tampa continue to give so much to this great city.  While small in number, their presence is felt far and wide, both in their professional contributions and in their extensive charitable work to support local vulnerable people and protect our natural environment.  I thank them for their tremendous service.” 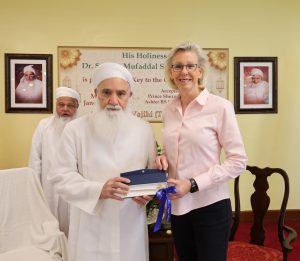 Accepting the award on behalf of the leader of the Dawoodi Bohras, Prince Malek Ul Ashter Shujauddin said, “We thank Mayor Castor for this prestigious honor.  Love for one’s country is an integral part of the Bohra faith.  As patriotic Americans, we are proud to call Tampa our home, and are devoted to making this city an even better place to live and work for all its residents.  And we thank the people of Tampa for regarding us as neighbors and friends.”

The Dawoodi Bohras of Tampa and Orlando have resided in the state of Florida for over 50 years.  As part of the faith’s global Project Rise initiative, the Bohras of Tampa regularly support local food banks and play an active